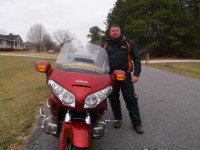 2008 Back to Back SaddleSore

Story by: Bob "Ironwing" Wilson
I first started riding with Hoagy on a 500 mile Dawn to Duck run. While I was riding to sign up, I was thinking I can't go 500 miles without stopping, as I caught up to the last three riders leaving the sign in site for the run. But, from that point on it was ride, stop, get gas and go. Bill Yurisko filled us in on what we could expect on longer runs with Hoagy and what it took to get the IBA patch and pin at the end of the run. Well, I made it and after the run we had dinner, sat around and shot the bull, and had a great time and the best of all, I was hooked. Not to say that regular poker runs are not fun, but if you want to test yourself, your bike, and have an experience you'll never forget, ride with Hoagy and the awesome people who make up Hoagy's Heroes, Inc., and I guarantee you, just an ordinary poker run will no longer be enough.

I started looking forward to the 1000 mile run. I signed up and the run started at 2:00 am, I had just got off a 10 hour shift but was eager to get going. The first couple of hours were tough, it was dark, I was tired and almost ran out of gas (not good). But as we rode steady through the night and four different states I knew I would make it and once again it was awesome. This time, I was among the first four riders back and it felt great, not only finishing the ride but knowing that I was helping raise money for a great cause and I was a little part of the group of Hoagy's Heroes. Once again, great dinner and great conversation with some of the most "top shelf" people you will ever meet.

After that run, I got a call from Hoagy saying a few guys were going to ride to lunch, did I want to meet them at The Pub and go with them. Sure, but little did I know, we would end up in Monroe, Michigan for lunch. That's just the kind of guy Hoagy is, he loves to ride and when you go with him, you never know where you will end up, but its always a good time.

Next came the 2000 Miles in 48 hours run. We started in St. Clairsville at 8:00 pm, an hour and a half later, we hit the rain coming up from the hurricanes in the South for the next 8 hours, after that 3 hours of fog. After the fog lifted I couldn't believe that I was still upright, flat out ride, stop and get gas and lets get to gettin! All of us in a row, steady, heading for the edge of Kansas where we turned around and headed back to Illinois, all of wanting to get the IBA BunBurner Gold Pin, that was if we did 1500 miles in under 24 hours. Hoagy knew we wanted it so we "put them in the wind" and made the deadline by 6 minutes!

I guess to sum it all up, I started with the 500 mile run finished with the 2000, made a lot of great friends, raised some money for great causes and I am looking forward to the 2009 schedule, especially the Coast to Coast.

There are absolutely no limits when you ride with Hoagy and all the Heroes who do so much for charity. Thanks Hoagy for memories of a lifetime, I'm sure these won't be the last.