We completed the West Virginia "Hill Billy 1000" World Record Iron Butt yesterday, which was quite an interesting ride. We rode with the Organizer, Robert "Hoagy" Carmichael. Hoagy is a great person, and devotes his time to organizing Iron Butt events to raise money for less fortunate kids.

We started out from Morgantown, WV. The first stop was in Bluefield, which is where the first issue occurred -- the two gas stations that were supposed to be open 24 hours were not. After half an hour we found gas across the state line in Virginia, and were on our way again -- unfortunately the leader, who shall remain nameless, took us on an unplanned tour of Bluefield and the surrounding area trying to find I-77. Hoagy (oops, I wasn't going to mention a name) finally consulted one of the riders that had a GPS and was then able to lead us out to the highway.
The second stop was in Williamstown, North on I-77. One the way there, One of the oldest bikes, a Shovel-head ridden by Bill suddenly stopped. The engine had seized. After spending time there to make sure he had help coming, we rode on. After checking in at Williamstown, it was down to White Sulphur Springs, at the far Eastern point of I-64. There are long steep mountains there which -- supposedly due to the new emissions standards, -- my fuel-starved 2009 Ultra Classic could not top normal speeds up these hills with the throttle wide open and the transmission in a lower gear. (Do you know how embarrassing it is to get 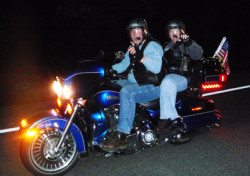 passed by a soccer mom in a minivan when the Harley is wide open, giving all it has?) By the time I got to the top, the group was gone. The only way I could catch them was at the toll booths -- I had a secret weapon: E-Z Pass. While they were waiting in line, I zipped through the E-Z Pass lane, and gained a mile or so on them, which, of course, only lasted until the next mountain.
From White Sulphur Springs, we went to Kenova, to the far Western part West Virginia. At one point, we got off an exit ramp to get gas. I was second in the group. As we slowed down for the ramp, all three bikes were behind us. By the time we got half way down the ramp, there wasn't a bike back there. It's amazing how fast they can disappear! After waiting a minute, Hoagy went back up and said only two words on the radio "they wrecked!"

What? Say again! Only silence.

We flagged down the next car coming down the exit. "There is a bike down and the guys are picking it up." he said. A few agonizing minutes later, we flagged down another "there is an ambulance and police there." This doesn’t sound good. Another driver said "It looks like there just standing around talking." This is too much. Finally Hoagy and two of the bikes came down the ramp along with two others that had stopped. "Bear" blew a tire and wrecked, but he'll be okay. Bear is a big tall kid and tough as nails. In fact, with the help of the EMS driver, they got his bike to a shop, put two new tires on it, and he actually rejoined the ride in the next swing through the area!

The next stop was from Kenova back to Morgantown. At this point there were about a dozen bikes in our group – we tend to pick up and drop off some at each gas stop. Not far out from Kenova, we were passing a pick-up truck, when a plastic gas can flew up from the truck bed, right beside me, hit a bike behind me, and bounced down the middle of the seven bikes in behind. One bike quickly pulled over and the rest behind him stopped as well. Luckily little damage had been done, and they were quickly back on the road.
Hoagy could smell the end of the run and was focused on the finish. I thought taking sharp mountain turns on the WV Turnpike was thrilling, well, going around the curves on I-79 fast enough to scrape the floor-boards was something else again!

Safe back at the motel in Morgantown, we checked in -- in spite of the many unplanned stops, we still did the run in a respectable 19 hours -- then enjoyed the camaraderie of the others that made the trip, telling stories of this ride, past Iron Butts, and other interesting and often hilarious tales.

By the time I got to my room, exhausted from the long ride, I was asleep before my head hit the pillow.